Without question, 2019 will go down as one of the most challenging vintages we’ve ever seen. It will truly be remembered as a “farmer’s vintage”, where experience, caution and a bit of luck meant the difference between success and failure. We are happy to report that everything we harvested this year was of an exceptional quality.

We’re going to recap the growing season’s progression, followed by an analysis of each block harvested. 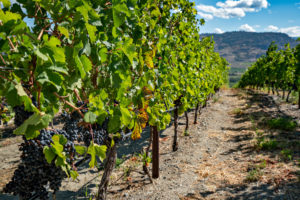 We avoided the early Spring frost that affected many northern vineyards, and reached bud break around the same time as last year. Through most of the early season, we saw steady progress, with a nice fruit set, and favourable weather.

As we progressed through May and June, we were anticipating the usual late Spring rains; however, they seemed light. It was in July that the rain arrived, with rainfall levels not seen since 2014. It was during this time we began to suspect this was a year to be cautious. We decided to drop more fruit than originally forecasted, carrying a much lighter crop than the usual 3 – 4 tonnes per acre we generally target. Some blocks we went down to as low as 1.5 tonnes per acre! In dropping the fruit to this low of a crop level, we focused all the growing energy on to a smaller and, hopefully, higher quality crop.

Late July and August were excellent, but, like someone had flipped a switch, as soon as Labour Day passed, the rains began. Environment Canada recorded 20 days of rainfall in the month of September.  At this point, our suspicions were confirmed, and we were to reap the benefits of our cautious dropping of fruit earlier in the season.

In previous discussions, we’ve talked about having enough tanks for every block in the vineyards. This meant that we were in no rush to begin picking – wineries that have more vineyard blocks than tanks must pick their first crops in time to complete their ferments in time to use the tank a second or a third time later in harvest, forcing winemakers to pick earlier and at lower ripeness levels than desired. We have no such pressure at Second Chapter, allowing us to bide our time and pick only at the optimal moment.

In the second week of October, the South Okanagan received an early frost, wiping out the canopies of every vineyard south of MacIntyre Bluff. At 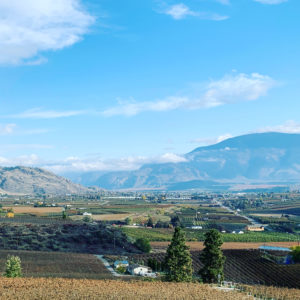 Second Chapter, because of our caution and diligence earlier in the season, we were already at high levels of ripeness by the time the unexpected frost hit.

We began our first pick in the third week of October, and maintained a rapid pace of harvesting, finishing our final pick of Cabernet Sauvignon and Cabernet Franc on October 30th.

When all was said and done, the quality of fruit was very high; however, the total tonnage was roughly 30-40% less than what we’d normally harvest from our vineyards. However, that’s a small price to pay considering the level of quality we were able to achieve.

This year’s Chardonnay was very nice, but slightly lower in sugar than in previous years, dictating a slightly lower potential alcohol level. We’ll share more updates on this as we progress through the next few weeks in the cellar, but the initial assessment is very good. It’s got very nice aromas on the nose, and a core of flavours such as peach and apricot. This wine just finished it’s initial ferment in French oak barrels this week, and will begin it’s malolactic ferment next week; this secondary ferment will soften and “butter up” the Chardonnay before it gets barrelled away for the next 9-10 months.

This year’s Merlot is phenomenal – even in one of the most difficult farming years, this wine is going to be incredible. It’s just spent 29 days in tank on its skins, slowly receiving multiple daily pump overs, and 4 punchdowns of the cap. Each day, this wine has been building flavour and texture. Making reference again to the point of “a tank for every block”, this Merlot is the prime example of why you never want to be forced to rush your wines – we have been able to take our time to build this wine up, while not extracting any harshness. It is a beautiful balance of rich, plush tannins on the palate, expressive on the nose, and an incredible array of fruit flavours throughout. We will be pressing this off tomorrow and transferring it to barrels to begin its roughly two year journey to the bottle.

The Second Chapter Viognier again exemplifies the differences in this grape between Rattlesnake and Second Chapter. This wine will be the lighter of the two, but packs an incredible concentration of flavours, ranging from peach, apricot, nectarine to lemon and honey. It’s got a nice level of acidity that will keep it bright and lively, and the nose is very expressive. This wine has completed its initial ferment all in barrel, but will be split between a handful of barrels and stainless tank in order to maintain the brilliance of the nose.

Whereas the Second Chapter Viognier is bright and lively, the Rattlesnake is dense, deep and plush. While it also shows the vibrant peach, apricot and nectarine flavours shared with its Black Sage Bench counterpart, this Golden Mile Bench Viognier has these incredible butterscotch and caramel notes. The density is also astounding, with even at this early stage presenting a wonderful fullness on the palate that will only be further developed as it continues through the cellar.

Roussanne is a varietal that we are getting more and more excited about. Each vintage we further refine our growing and winemaking techniques to ever better results. This year’s Roussanne has an incredible level of complexity that exceeds our expectations. Floral notes on the nose are incredibly expressive, and on the palate we’re seeing initial flavours of peach and pear. Subtle notes of almond and honey are also present. These preliminary notes don’t fully do justice to the potential we see in this wine, and one we are eagerly looking forward to sharing future updates on.

It is in these final picks of the later ripening reds where we really saw the benefits of carrying a very low crop and cautious vineyard management. The remaining reds achieved incredible ripeness that will undoubtedly set themselves apart when they’re finally released in 3 years time. In this early stage, the Syrah shows subtle pepper on the nose, complimented by blueberry and black cherry. Syrah is a subtle and complex wine in our portfolio, built around a silky core of fruit flavours, but it will take time to uncover all the delicate notes waiting to be discovered. We’re excited to watch this unveil itself further as we progress through the cellar; this is a fantastic starting point. This wine still has at least another week in tank on its skins before we press it off, and will update our notes once it’s settled into barrels in December.

The Malbec this year is massive, yet in an odd sense delicate. There is this huge core of dense, dark fruit and rich, plush tannins, but a very elegant airiness to it. In past years, we’ve gone to 26-28 days on skins; however this year we will be pressing it off after just 21 days to preserve the elegant softness we’re observing in its current state. It will go in the basket press first thing tomorrow morning before we tackle the Merlot.

This year we received an opportunity to farm a small parcel of Cabernet Franc in the Hugging Tree Vineyard in the Similkameen Valley, as we don’t expect our first harvest of Cab Franc until next year. While it was our first time farming this particular block, it is directly adjacent to the Vanessa Vineyard, which some of you may recall we farmed from 2009-2012. The quality is very good, and while still fermenting on its skins, we’re already getting lovely red fruit notes on the palate, and the distinct earthiness of Cabernet Franc on the nose we love so much. We’re enjoying getting to experience the unique terroir of the Similkameen Valley once again.

Our final harvest of the year was the Second Chapter Cabernet Sauvignon. This wine is also still fermenting on its skins and will present itself more clearly in a few short days, but the quality is exceptional. Massively full-bodied, but with soft, smooth tannins; an incredible density of dark fruit notes on the nose and the palate. The 2019 Cabernet Sauvignon is beyond anything we’ve ever seen before, grown in the most unlikely of vintages. For those yearning for an absolute powerhouse Cabernet, this wine will surely be it.